Links
Related Sites
Utilities
Search this blog
Ben & Becky’s Blog
A window into what we’ve been up to!
This entry was posted on Tuesday, May 4th, 2010 at 22:12 and is filed under Holidays. You can leave a response, or trackback from your own site.

A little while ago, I heard from Briony, saying that she and Leo would be in Strasbourg for the first weekend in May, and asking if we would be around. As it happened, we finished the season in St Anton a week earlier than normal (something to do with a distinct lack of snow combined with everything being closed!) and this meant that we could be there too! The last time we were all together was in St Anton in January (and that was only briefly) so we were extremely excited. 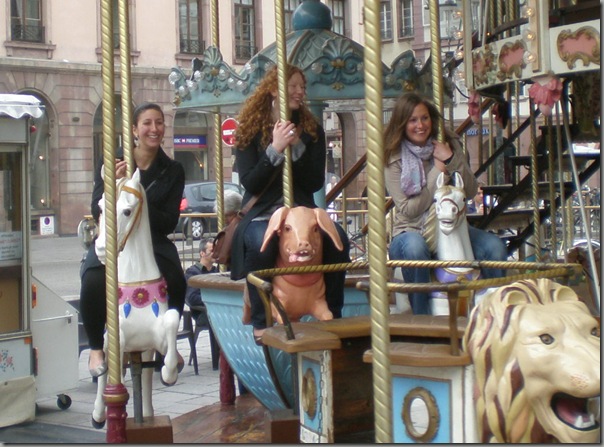 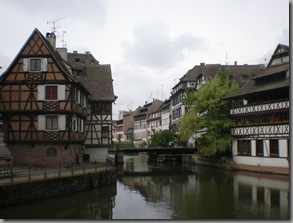 Ben and I drove from Zurich to Strasbourg, leaving at just after 5pm and arriving just after 8pm (including searching for the hotel car park, which was not as easy as it might initially seem!). This left just enough time to check in a our hotel, Hotel Aux Trois Roses and go to meet Kathryn for a very cheesy meal in La Cloche a Fromage (also known amongst ourselves as âthe cheese restaurantâ!). The food was great, with Ben and Kathryn opting for a Munster Salad and a cheese plate of seven different cheeses (which had to be eaten in a particular order) and myself choosin 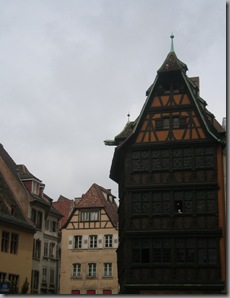 g lapineau (rabbit, apparently) followed by sauerkraut. For desert, Kathryn and I had creme brulee (or the small amount we actually still had room for) and Ben had something else which we canât remember the name of. After this, we went out for a drink at the phonotek, a newish bar. Unfortunately, due to a very busy week and not very much sleep, I was having trouble keeping my eyes open, so we retired to the hotel for the night.

The next morning, Kathryn was on a cleaning mission in her apartment, so Ben and I took advantage of some reasonable weather (ie. not raining) to go and explore the sights of Strasbourg. We ended up doing a fairly big walk, going to La Petite France, to Place de la Republique, down to Place Kleber (past a 1st May demonstration) and back to our hotel past the 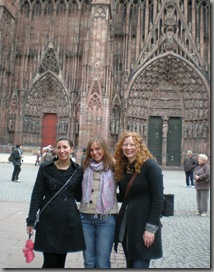 cathedral. We then visited Kathryn and whilst deciding how to spend the afternoon, ended up falling asleep for a little while! Luckily we woke up in time to go and meet Briony and Leo, who were arriving at the station shortly. Whilst waiting for their train, we had a drink and bite to eat in the bar in station. Then we made our way back to Kathrynâs apartment. We spent the rest of the evening having a great time catching up and having dinner (thanks to Kat for the amazing roast chicken and rhubarb crumble!) and some drinks. A lovely way to spend an evening!

The next day, we met at Kathrynâs after breakfast to decide how to spend the day. After some discussion, we opted to spend the day exploring Strasbourg. We went on a carousel ride (for some reason the boys werenât keen on this, so just us brave girls went on). We also wandered around Le Petite France, explored (and got inspired by) the craziness of some of the colle 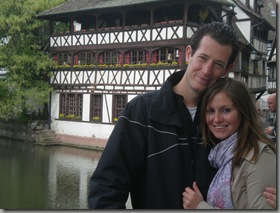 ction in the modern art gallery (a traditional favourite place of mine!) and had an assortment of tarte flambee in lâacademie de la biere, whilst sheltering from the rain. After that, we walked to the Orangerie, crossing a river full of strange creatures called Coypu on the way. We also saw the European Parliament and played âGuess the embassyâ. On the way back, we had a quick look at the animals in the zoo (we even saw a one legged stork!) and then once again found shelter from the pouring rain in a nearby bar. We had dinner at Restaurant LâAmi Schutz in La Petite France before dropping everyone back off at Kathrynâs apartment and beginning the long journey back to Zurich. We arrived home just before midnight and went straight to sleep. What a fantastic weekend! 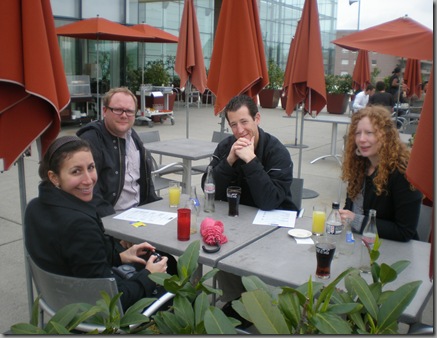