Links
Related Sites
Utilities
Search this blog
Ben & Becky’s Blog
A window into what we’ve been up to!
This entry was posted on Thursday, April 29th, 2010 at 21:17 and is filed under Skiing, St Anton. You can leave a response, or trackback from your own site.

Every year at the end of the ski season St Anton hosts what has got to be one of the most insane ski races on the planet â Der Weisse Rausch.  The race is one part of a three part ironman type of challenge â The Arlberg Adler.  Not being much of a runner I donât bother with the alpine marathon and so far havenât been bothered to get my bike up to St Anton for the bike race, but the skiing bit I can do.  Iâve competed in the Weisse Rausch three times before which was more than enough up until race day when I decided that, just for the heck of it, I ought to do it one last time.

The official video of the race from St Anton Tourism

The race starts almost as high as you can go in St Anton, the top of Valluga.  The start is quite a sight to  behold as about 200 or 300 skiers all start at the same time in a so called âmass startâ.  From the top it is a 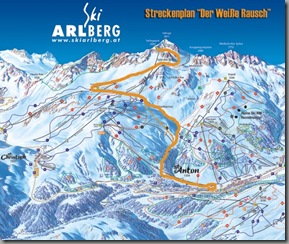 very shot schuss down towards a T-bar, but before getting there the racers need to head right and run up the hill to the Valfagehrjoch (just below the top of the Schindlergratbahn).  Once this run has been completed (depending on fitness that could be a couple of minutes or more) the actual race starts as the participants head straight down to the Ulmerhutte, around and then down Happy Valley (Steissbachtal), past the Mooserwirt and finally down to the bottom of Galzig.  Depending on the year, the bottom stretch could have an obstacle course built in just to make things a little harder.  It should probably be pointed out that this all takes place after 17:00 with the snow having been exposed to the hot spring sun all day as well as having been bashed around by all the skiers going up and down the whole day.  Suffice it to say, this race is not for the faint hearted! 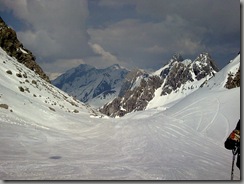 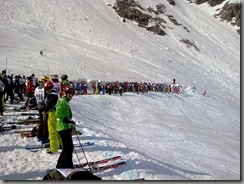 As I mentioned earlier, I hadnât intended to do the race so hadnât signed up in advance, however itâs  almost always possible to get a start number on the day because so many people donât end up turning up (especially when volcanic ash prevents air 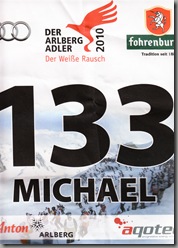 travel).  So I headed to the Wellness centre and picked up my start number on Saturday afternoon.  The usual nerves started to set in and only got worse as the afternoon went on and we headed up to the start.  I had companionship from Iain who was doing it on a board and Brendan who was skiing it with me.  Brendan had his helmet cam with him so has put together some fantastic first person footage of the race (at least from his perspective) which you can see by clicking this link.  Becky had told me in no uncertain terms that I was not to injure myself during the race so I decided I would make getting down in one piece my objective and not worry about getting down amazingly fast.  Even with this in mind it is a tough race as your legs are destroyed from the run up the hill and the snow is so heavy that it requires significant energy to move them even slightly.  The moguls just add to the fun as you hurtle down the hill, never actually sure that youâre going to be able to make the next turn or land the next jump.  Once down at the bottom there are a huge number of people out supporting and cheering, which is a nice feeling and gives that little burst of energy needed to take off the skis and run across the finish line.

Once youâve caught your breath again itâs time to celebrate with a nice refreshing beer.  Thankfully Becky had been parked at Base Camp for the duration of the race, so beer was easy to come by.  The results are posted online almost immediately by Datasport.  As expected my time was not great; 18 minutes, but at least I got down in one piece 279th out of 412 competing male skiers.  Race over for another year, Iâll have to seriously think about whether to compete again next year or notâ¦.

Video of the race from a different perspective from Skiing Austria
Leave a Reply
If you'd like an icon to appear on your comment, sign up with Gravatar by checking the box underneath the submit button to upload a gloablly recognized avatar that will follow you around when commenting on weblogs. Your email, though required, is never published.