Links
Related Sites
Utilities
Search this blog
Ben & Becky’s Blog
A window into what we’ve been up to!
This entry was posted on Monday, April 12th, 2010 at 20:37 and is filed under Holidays. You can leave a response, or trackback from your own site.

As those of you that read this blog may have noticed, everything’s gone a bit quiet recently!  The reason for that isn’t that we haven’t been up to anything, in fact quite the contrary, we’ve been extremely busy.  However all the stuff we’ve been up to hasn’t been particularly blog-worthy (moving house, building furniture, etc) so we haven’t been putting anything up.  However at the end of March we headed over to Florida for a week and a bit, and that is definitely worth telling about! 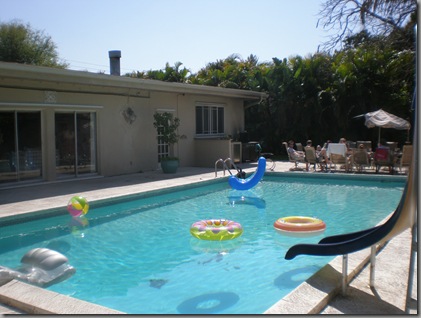 Ben and Sue, friends of ours from University, are getting married later this year and had decided that what they really wanted to do for their hen and stag (or hag as it became christened) do was to head out to Miami for the Winter Music Conference.  This would combine a love of sun, holiday and music and make a pretty good trip for all involved.  After much deliberating and planning, it was decided that 13 of us would head over to Miami and rent a villa for the week.  The villa was based in Miami Shores giving us relatively easy access to the airport, and more importantly Miami Beach.

The first couple of days were spent relaxing and exploring Miami Beach during the WMC where there are even more parties and events than usual going on around Ocean Drive and Collins Avenue.  The WMC

culminated in the Ultra Music Festival on Friday and Saturday which took place in  Bicentennial Park in downtown Miami.  The festival was great fun (once we managed to get in, it took over 2 hours to collect the tickets I had waiting for me there) and it was an interesting experience being at a festival in the middle of a city rather than out in the countryside somewhere.  The line-up was impressive as was the design and sheer size of the main stage.  It was also quite a nice experience being able to return to a normal house at the end of it, rather than returning to a tent and having to make use of festival facilities!

Unfortunately Becky had had to stay in Zurich to reach the end of term before being able to come out and join us, so she only arrived on the last day of the UMF.  Once everyone had managed to recover from the festival it was on to explore Miami – this time with Becky as well!

Ben & Becky’s Blog » 27/04/10 – Faithless
| 001 | May 4th, 2010 @ 21:07
Leave a Reply
If you'd like an icon to appear on your comment, sign up with Gravatar by checking the box underneath the submit button to upload a gloablly recognized avatar that will follow you around when commenting on weblogs. Your email, though required, is never published.