Links
Related Sites
Utilities
Search this blog
Ben & Becky’s Blog
A window into what we’ve been up to!
This entry was posted on Tuesday, February 2nd, 2010 at 19:01 and is filed under Skiing, St Anton. You can leave a response, or trackback from your own site.

After the mammoth effort getting to the UK for Christmas, we managed to get back to Zurich with only a short delay.  We had decided that it was going to be far too difficult to get to St Anton on the evening we landed (30th) so instead would wait for New Years Eve before heading up.  That gave us just enough time to go out and see Colin, Gwen and Rick at Paddy’s for a bit of an impromptu engagement party.  Also a conveniently good time to ask Colin if he would be my best man – although considering the state of all of us by the time we left, I think I’ll need to double check he still remembers that conversation!

So we headed up to St Anton on the 31st, arriving just as it started to snow making it a little treacherous 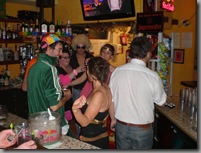 getting there.  At one point we were headed sideways down the road towards a sharp bend, would not have been an ideal start to the New Year (falling off a cliff rarely is) but thankfully the tyres caught and 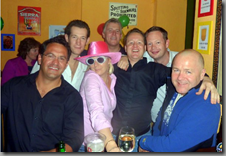 we could continue on to St Anton – admittedly quite a bit slower than before.  Dermot had organised dinner at Robi’s Rodelstall, a restaurant at the end of the sledge run from the top of the mountain, so we headed up there to meet everyone else.  The meal was very good and the restaurant is nice and authentic.  After that it was straight off to Cuba for their Back to the Future NYE party.  Unfortunately we had been previously informed that it was going to be a Mardi Gras theme so our fancy dress was unfortunately useless, but it was a good party nonetheless and we got to see in both European New Year and British New Year before needing to head home.

We spent the next couple of days up on the hill before Becky decided it was time to give skiing another   go.  So on Sunday she rented some skis and headed

off to ski school while I headed up to give the

DannyCam its first outing.  A couple of years ago we had discussed picking up a helmetcam but never actually go around to it, but Danny had seen one that he was impressed with so bought it as his Christmas present to himself.  We had pretty good (if cold) weather and some lovely powder that had come down the day before to give it a proper test.  If you’re curious the footage can be seen by clicking here.  After Becky having elected to join the absolute beginners group she managed to get promoted the next day and seemed to be taking to the skiing quite happily!  In the meantime I was unfortunately back at work so couldn’t partake, but Becky happily kept putting what she’d been taught into practice. 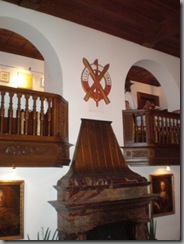 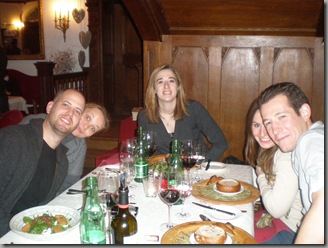 On Monday we had a visit from Ariel and Tania over from Moscow for Russian Orthodox Christmas.  They

only stayed one night unfortunately but it was great to see them and we had a very nice meal in the Museum on Monday night.  Nathalie had also come up on

Monday and so headed off with Becky on Tuesday morning to get some skiing done.  Since the weather on Tuesday was spectacular and it was a night sledging day, I booked us into the Rodelalm (halfway down the sledge run) for dinner and we headed up to give

Nathalie and Becky a bit of an introduction to night sledging.  It was great fun, and our places in the restaurant were literally on the side of the fireplace which made it really good fun – although as usual I was defeated by the Schweinhaxe which is just too much for one person!

The rest of the week was much of the same with none of the predicted snow arriving leaving us with only what was left of the snow that came down the previous weekend.  That did not prevent us from having a bit of a ski around and the weather was beautiful on Sunday allowing Rick, Danny and I plenty of opportunity to stretch our legs on the longer pistes around St Anton.