Links
Related Sites
Utilities
Search this blog
Ben & Becky’s Blog
A window into what we’ve been up to!
This entry was posted on Sunday, January 17th, 2010 at 17:16 and is filed under Weddings. You can leave a response, or trackback from your own site.

Well, where to start?  I had been thinking for a while that Becky and I had been together for quite some time (at least in total) and so far showed no signs of not wanting to spend more time together.  She had moved over here to Zurich to live with me and so far we had managed not to kill each other – or even come close.  It seemed therefore a natural step for us to get married.  That and of course the minor fact that I want to spend the rest of my life with her.  Of course as anyone who has proposed knows, it’s not quite as simple as it sounds.

So the first step was to find a ring.  Surely not too tricky, this being a city there are plenty of jewellers around.  This proves quite clearly how little I know about buying jewellery, but at least I did know that I needed to find out what size ring to get.  How to do this though, was anyone’s guess.  I raided Becky’s jewellery box to try to find a ring to give me some idea of size (not to pawn and pay for it I assure you) however as those of you who know Becky can attest to, she doesn’t wear much in the way of jewellery and I couldn’t find a single ring anywhere.  So I had to do the next best thing and guess – at least that was after I had discounted some subtle finger measuring device I could try to use when she was asleep.  So I went into a jewellers and had a long look at all they had on offer and chose what I hoped would be a ring that she liked.  They assured me that they would be able to resize it between one or two sizes should my guess have been wrong, but they just as quickly assured me she couldn’t return it if she didn’t like it!

So armed with a ring, I now needed to ask her father’s permission.  I know; a lot of people don’t think that’s necessary anymore, but call me traditional, soppy, whatever you like, I felt I had to ask.  This however was not quite as easy as it sounds since Becky’s family live in the UK and we are in Switzerland.  I was pretty sure this wasn’t the type of conversation I wanted to have over the telephone, so I had to decide when I would next see him face to face.  Since we were coming over to the UK and staying with Becky’s parents first, that seemed to be the perfect opportunity.  So I tried to figure out some way of broaching the topic and decided that it would really have to be a spur of the moment thing, but hopefully there would be enough moments since we were going to be with them for almost two days.  Of course as anyone who’s read our blog recently knows, Easyjet, Luton Airport and the Great British Weather quite nearly made this an impossibility.  So, fighting the very strong temptation to forget about it, I summoned what little courage I could find in the sub-zero English winter and asked for his daughter’s hand in marriage.  Thankfully he said yes (or this would be an extremely embarrassing blog post) so that was the second step out of the way!

So, ring and permission on my side, I now just needed to decide when to ask Becky.  I thought Christmas Day would be pretty good and was seriously hoping I hadn’t confused ‘good’ with ‘horribly kitschy and cliched’.  I toyed with a couple of ideas but decided I was pretty sure that I didn’t want the potential embarrassment of asking, and getting rejected, in front of my entire extended family (see the post here for details of what we were doing for Christmas), so it was Christmas Morning then – before we’d met everyone else.  So along came Christmas Morning and as we were opening the presents that my mother kindly supplied us with in our stockings, out came a little extra present.  I had earlier decided that the standard jeweller’s ring box was a little dull and obvious as well, so had elected to buy a little wooden draw that Becky and I had seen at the Christmas Market in Zurich and had thought was very nice, but completely useless.  As she unwrapped it, I explained that I thought I had found a use for it – and thankfully Becky agreed and the answer was ‘Yes’! 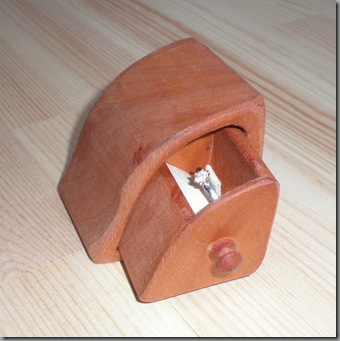 As we struggled to figure out which hand the engagement ring should go on, we decided it might be quite amusing to actually not mention anything to anyone and see how long it would take for people to realise.  Becky doesn’t wear much jewellery so we didn’t think it would take long with a number of eagle eyed female aunts and cousins, not to mention my sister and father.  However the only people that realised for pretty much the entire day were my cousin and his girlfriend who were staying in the same studio as us and confessed to actually overhearing.  It wasn’t until much later in the afternoon that one of my cousins realised what it was and then the proverbial cat was out of the bag.  One thing I hadn’t considered prior to deciding on when to propose, but that was a particularly nice fringe benefit, was that we had plenty of bottles of champagne already chilled for toasts before Christmas Dinner. 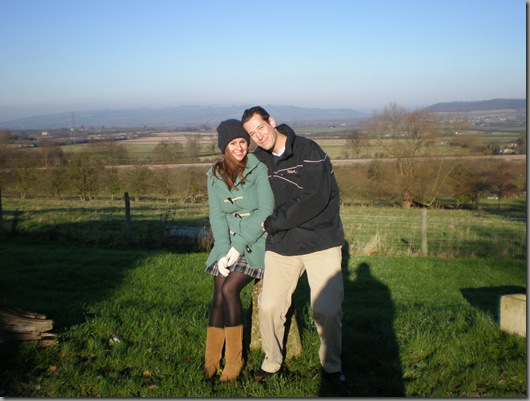 So there you go, for those that had been pressing for the story, hopefully you’re satisfied!  Now to go off and plan a wedding.