Links
Related Sites
Utilities
Search this blog
Ben & Becky’s Blog
A window into what we’ve been up to!
This entry was posted on Thursday, December 10th, 2009 at 19:47 and is filed under St Anton. You can leave a response, or trackback from your own site.

Well the ski season is upon us again – finally!  We had been up to St Anton for the past two weekends: The first one to move into our new place and do the hand-over, collect keys, sign inventory, etc.  The second because we fancied going out and having some fun at the various opening parties (Scotty’s and Postkeller on Friday night) and Cuba showing the rugby on Saturday.  However there had not been any snow at all so St Anton had not bothered to open their lifts so consequently we decided not to post anything.

some of the lifts.  That was very convenient as it was KK opening on Saturday afternoon and the KK proves a lot harder to get to if you can’t ski there!  Because there were only a small subset of the lifts open, we decided that there was no need to force ourselves out of bed at the crack of dawn, especially after our first proper night in Bar Cuba, so we started relatively late by sorting out our skis, equipment and passes, and headed up the hill around midday.

It was a nice day skiing and the weather was quite nice.  The snow in the main part of the resort was very

good for the time of year, but on the piste down to the village (or KK) it started to get very sketchy.  Either way we made it there in time to join the Bar Cuba staff for their first KK outing.  After a decent watering it was down into town to watch the annual Arlberg-Pass-Krampalar which really needs to be seen to be believed.  In short it is a procession of terrifying creatures who march straight through the middle of town towards the main square, scaring little children (and a fair few adults) accompanied by heavy mettle and lots of fire and noise.  In the main square they have a bit dance around for a while before the entire event culminates in a firework display and the terrifying creatures then remove their masks and everyone heads off to celebrate – any excuse! 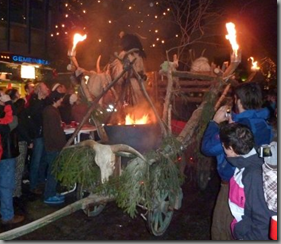 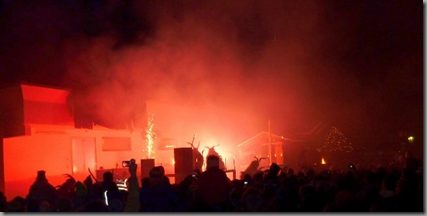 After that impressive spectacle it was off for dinner at Pomodoro’s (first time this season) and some more visiting bars to catch up with old friends and see what changes had been made.  Heading back home not too late since we’d been at it early on and were getting tired after our first day skiing this season.

Sunday was another late start, but a good few hours on the slopes in the afternoon. Finishing off watching the football in the pub, a nice way to end a good first weekend skiing! For anyone that’s interested in a virtual tour of our apartment in St Anton, there is a video linked below that Becky took to give you a bit of an idea.